I was driving thru boro park today and witnessed hundreds of people on the streets celebrating a new sefer torah.

I was more shocked when I saw a video on youtube showing the police forcibly arresting a Jewish Hasidic man for the crime of walking the streets of boro park. The cops came like storm troopers.
the crime was walking with a sefer Torah. unreal. This cant be the USA.
https://www.youtube.com/watch?v=GhJzofK6SmU 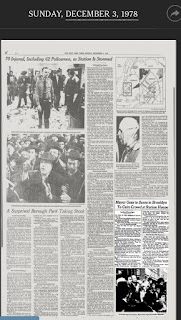 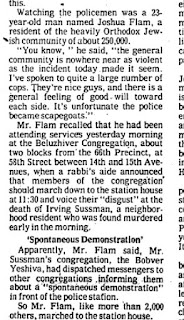 My cousin Josh Flam was quick to point out to me how the youth of today do not remember what happened in 1978 when a jewish man was murdered in boro park and the Jews stormed the 66th precint.

I was horrified watching this video. What happened to the shomrim and the community relationships with the NYPD? This video is very disturbing and bodes ill for the Jewish community..

My brother, Michael David, was the lawyer who had two cops busted for raping a Jewish girl.
The family of the person who got arrested should contact him and he will get the cops in trouble.
This was not right and Jewish lives matter.

The event, an hachnoses sefer torah, or the giving of a new torah, is like a wedding celebration, who in the world would storm a wedding? This was outrageous behavior of the NYPD. Citizens of New York should not tolerate such barbaric behavior. In my humble opinion, that police officer who arrested the innocent hassidic man poses a threat to society and should be removed from the police force.

post script...he was freed late at night
https://youtu.be/Rlj8RzoOakQ
Posted by earl david at 7:02 PM No comments: